Tao Yuanming, also called Tao Qian, was named "Mr. Jingjie" by other people, and he called himself "Mr. Wuliu". He was a renowned anchoret and outstanding poet in the Eastern Jin Period and commonly labeled "pastoral poet". His talent in poem and the unbending lofty sentiment greatly influenced a lot of scholars in the later times and are stilled praised by people.
Since his childhood, Tao Yuanming read a lot of books. He accepted the ideas of both Confucianism and Taoism. But because he was born in a common family, he was looked down upon in the imperial court that had stern hierarchical system at that time. When he grew up and served as an official for thirteen years, Tao Yuanming got weary of the dark life of official circles. So he resigned and went back to nature until he died. In the period of the twenty two years after he retired, Tao Yuanming led a self-supporting farming life in the countryside. Although he was poor and had to work hard, he was satisfied with the tranquil life. He was fond of chrysanthemums, so he planted a lot of the flowers around his house. Furthermore, he liked to drink wine and every time he drank, he would turn out drunk. During his late years, his life was impoverished. Some of his friends sent him money to relieve poverty, but he spent all of the money on wine. In 427 A.D., Tao Yuanming completed his 76 years of life and departed from the world. His tomb is at the foot of Mianyang Mountain of Jiangxi Province and is preserved in a sound condition.
One hundred and twenty five poems of Tao Yuanming have been left today. They can be divided into three categories, i.e., drinking poems, expressive poems and pastoral poems. His poems pay great attention to expressing emotion and aspiration. The unsophisticated and beautiful lines are embedded with his strong feelings and profound trace of life. Tao Yuanming is the founder of pastoral poems. He boasts the largest number of pastoral poems that are also the most famous. Five Poems of Returning to the Life of Farmers are the most outstanding ones which fully reflect the enthusiasm of the poet for the unsophisticated farm life. Among the works of Tao Yuanming, there are some Cifu (a style of metrical composition like that of the fu - rhapsody) and prose that have been retained to the present days. His Cifu are represented by Ode of Going back to Nature, which is the heroic manifesto about his resignation and retreat. It unfolds the poet's romantic feelings of admiring nature and pursuing freedom. Record of the Peach Blossom Valley is the representative work of his prose. In the prose, he described a utopian society. It is also the criticism and irony of the poet to the dark reality.
The Anthology of Tao Yuanming is the first literary collection in the history of Chinese literature. His poems have been pervasively spread in the world and brought about great influence to later generations. The poets such as Li Bai, Du Fu, Bai Juyi of the Tang Dynasty and the scholars as Ouyang Xiu, Su Dongpo, Xin Qiji of the Song Dynasty and so on all thought highly of him and took him as their bosom friend. Even his affection for wine has also influenced a lot of scholars in later generations.

Standing beneath willows and think of returning... 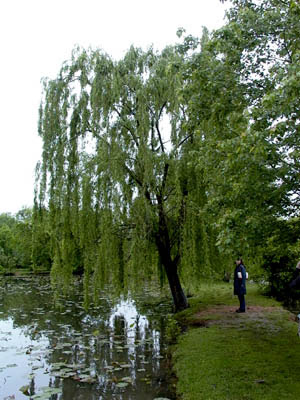