Something swinging in the wind.

Wild whipping of the tips

Of the limbs, but not the limbs

Themselves, frozen and creaking.

Landed on the cradled loaf

She was carrying before her

On the front stone porch beneath.

Crashed on its covered crust

In the icy brittle chill of evening.

For finger to break from its cozy nest.

But as I have said,

It was the limb, the limb it was

That broke the bread

Beneath the rocking boughs.

Oh, the Baker?  She was shaken,

Shocked, as though disarmed,

Battered and patted with fronds of pine,

They cut the lawn today.

They were cutting the frost today.

They were nipping at Jack Frost

The harvest hack at back of the knees,

Just after the best of Indian summer.

Theirs today was but a tender shave

To take away some green,

To preserve some green,

To force up some green,

To make for themselves some green,

Stuck up above the velvet moss,

As they cut through the frost,

I. THE BEGINNING OF THE END

It was a sunny Tuesday morning on July 2nd

with the usual rush hour traffic.

Your day began with a cup of Assam tea and a crispy toast.

You put on your business casual work attire,

a black Raymond trouser and a checked Arrow shirt;

but there was a change of plan that day.

You had to see father in hospital for fracturing his hand

when he fell from his bed the night before.

thinking fresh coffee would cheer him up.

You placed the lower steel decoction container on the countertop,

positioned the steel mesh separater on top of it,

placed the top steel container over it,

put ground coffee powder into it followed by boiling water,

and let it settle for twenty minutes.

To finish it all, you added boiled milk and sugar to the decoction

and mixed it for a frothy coffee.

You filled the insulated mug with filter coffee

and started off on your motorbike taking Cantonment Road

hoping that everything would turn out right for father to return home.

II. THE MOMENT OF THE END

Twenty minutes into your ride--halfway--

in the din and bustle of traffic,

a white Maruti van collided with you head on.

You were thrown to the corner of the road;

with its wheels whirring one last time;

your office backpack lying a couple of feet away from you.

Our father’s favorite coffee dripped from the mug

as your heartbeats faded into silence.

No wails, no groans from anyone,

not even from the lady who drove the van.

She got down, saw you unresponsive, got back in, and drove away.

Moments later, police in a van passing by noticed you

and took you to the hospital emergency room.

The doctor in charge there pronounced you dead.

The police located your school badge,

contacted the administrator who gave our home address.

They informed our mother by phone who rushed to the hospital

in a state of shock and took your body home.

Our father still waited for your arrival.

III. MY REMINISCENCES OF YOU

I still see you through the lens of tears

that wet my eyes as I remember you.

I remember the many rides

you took me on your motorbike without saying ‘no’ even once.

Your whistle rendered a lilt to the breeze as we rode along.

I see you in triumph as you made it

through the interview for a graduate teacher.

You shine in the highlight as I reflect on our past:

the jokes we shared at teatime;

the rules of play you stressed,

no matter who won or lost;

the ideas you put forth as we discussed poetry;

the encouragement you gave

to turn Sundays into leisure days and take it easy.

The last smile of yours

twenty-five years ago as you waved goodbye,

still floats in my memory.

The flame of your life continues to glow,

its warmth comforting my heart;

reminding me, you are as near to me as you were,

your image apparent as a metaphor.

My grief of your sudden end no longer stands out.

IV. YOUR END IS NO PRIDE FOR DEATH

You have done your part and made your mark,

as a teacher in a Christian middle school,

fair and good in your profession,

though for a short-and-not-too-short three years.

Your effort rewarded through the words

of the Bishop who later visited our house,

He was good, honest, and well respected.

And it was God who gave the wound,

So He Himself would heal the wound.

To me it seems like the role of death

Footprints of many generations outlive it.

Its very identity turns into a dimming light.

Dear brother, from a tombstone,

epitomized by your meteoric talent.

And then there is afterlife

that welcomes you into a new world—

who knows what wonders it holds.

A reality that opens gates to the infinite?

I no longer question, “Where did you go?”

For, ever you live on—

And I still see you!

Not with the light itself

though the breeze already left

–you need glasses, the kind

and for centuries would weep

to birds that go on living

by wings and distances

–in the end the book too

will lose its slack, approach

with the window in front

closed and even its shadow

had no chance to escape.

You have so many arms

holding fast the way all cradles

are lowered side to side

still listening for the breeze

that comes from one whisper more

–what you calm here

are lullabies lifting you ashore

as campfires, heating your lips

with salt and kisses

everyone sleeps on the ground

to cover you song after song

draining your heart into its arms

filling with ashes and autumn.

As if these sleeves are cooled

and that slow roll

you’re still not used to

left one arm in the open

struggling, almost holds on –the tattoo

given your bare skin

for its years, months, minutes

and the exact place held close

licking the ice from your shoulders

your breasts and the flowers.

From under this pathway the sun

brings your shadow back

the only way it knows

though what it pulls up

is just as weak, hardly pebbles

and on a plate left outside

as if this grave is still vicious

caged the way the dead

are fed with your mouth

calling out from the dark corners

careful not to come too close

not raise your hand

or one false move.

On the way up this darkness

though you count how high

a second time –these shelves

for the fire all wood is sent for

–in every room! caskets

stacked as if from behind

the wall would reach around

and the uncontrollable embrace

heating your cheek the way rain

returns to lower its face on the dirt

that never moves :these boards

kept open for a dry rag

all night rubbing your forehead

darker and darker, almost there.

David Gilmour is the host of Sound Poetry on 101.9 Radio Tacoma

The days of acorns, walnuts and horse-chestnuts--

The husks, shells, and cups we bored for use, then,

Eight of us, if memory serves, we smoked as pipes,

As clear as yesterday in an old and beautiful world.

The fields, we walked through the fields to woods,

The countryside spread out for miles, far out

Beyond construction sites and smoking factories,

Bulldozed and ready for new roads out of town.

Out by the shire farms where trees still stood wild,

A bull watched a tribe of boys tramping through

Its grasses.  There was a house, a dark gamekeeper

And his dangerous dogs--so long ago, folk tale time.

The trees, those ancient oaks we spiked to climb

When tawny autumn gave its sign the nuts were ripe.

Old gaffer and his dogs just couldn't grasp the why.

We would risk to climb the oaks, to join the birds

And squirrels in their nests.  He'd scratch his head and

Hang his bent pipe in his jaw and keep the dogs at bay.

‘Twas pipes and the sheer beauty of filching golden acorns.

Conkers he could suss the need, the game was all the rage.

We’d stuff into the bowl, and puff in awe till black like gold

Cut from a stub of Uncle’s choicest briar-pipe Turkish plug.

Oh, the heavens so filled with aromatic spice, gods laughed.

At home I'd raid the trays about the house for longish ends,

Even stole the odd one or two, Senior Service navy cut,

Familiar Players with the Jack Tar pictured on the face.

They smelled so sweet before the smoking and then came

The choking horror of the smoke.  Dead hard to get used to.

But there was nothing, nothing sweeter than the camaraderie

Of two or three bosom pals with stolen tobacco having a choke,

Pretending to smoke, cupping the lit end in the palm

Or flailing the hand sideways from the lips, longing to savor the smoke in throats,

In their lungs, through their noses, casually releasing it in streams

As we had seen our brothers, our parents blowing plumes

Into the blue foggy night air.  How important to start young.

To start the silent drawing of breath in acknowledged secret,

Forbidden togetherness in which talk was all you had,

Big talk, things that needed to be said together

To its new mask and stopped the clock.

At present the ink is not flowing true.

The blue ran out two days ago

And the red cartridge I loaded

Has yet to come through in its own flow.

I am sitting at the round table on the deck

As I used to years ago; in those days

The table was yellow; now a faded green,

The very same table we sat at, you and I,

When you just knew us in Seattle, the times

When we dined on simple fare, drank cheap wines.

The same table we recently sat around

For breakfast, coffees, and smokes

And at dinner for laughter, with the Pinch

And paté and the crude rolled doobies

Pushing our humors to ludicrous limits.

These days are bogged down with quandaries.

--Out back there in the deep shady green,

Under the trees, a significant thud --

The pears and the apples are dropping ripe. Out there

Out in the grass, I see another golden lump

Has been added to the mass. --Where was I?

I return to the original theme.—On it

Next to them, the 400 milliliter beaker

The candles we burned were obliterated

By a night’s catastrophic wind and rain,

At my right elbow rests a book,

Against The Grain - wouldn’t you guess it?

Mmm! The pears gleam in the candlelight—gilded almost...

The monotony: it’s a void, a blank, emphasized

By the intermittent thuds of falling fruit.

In Grace Notes: A Memoir in Poetry and Prose, Mary Anna Scenga Kruch creates a hybrid coming-of-age memoir that gives her readers indelible glimpses and insights into a life truly lived. With popular songs as scaffolding, Scenga Kruch ties the stages of her life to the history of her day, most notably the growth of suburbs and the VietNam war. While she pulls no punches in recounting trauma and the forces that can pull families apart, her carefully rendered memories and graceful meditations—suffused with the strength of a loving marriage and immersed in the natural world—let us know that “What Lingers” is ultimately “Benevolence.” 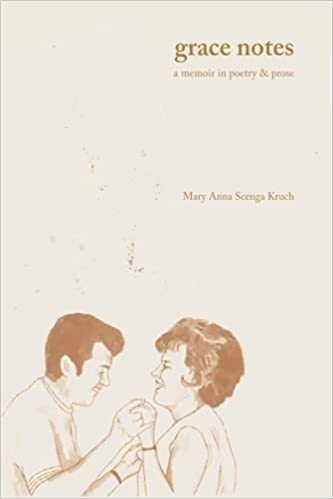